Down the scary path.

A few years ago, as a counselor-in-training me and 3 others girls lived in a very creepy, run-down two-story house.

One evening, after playing Swap, probably the best card ever, we started talking.
One of the girls, who we all called Skuttle, told us a story of a former girl scout camp where a man escaped from prison. In the middle of the night, he snuck into camp and killed two girls. It happened in the 70's but we were still scared all the same.

Night had come, and by this point, we were too scared to even walk 10 feet from our front door to the bathroom. We were texting(yes, we're terrible Girl Scouts) our camp 'mom', Pantsu, frantically, asking her to come back, telling her how scared we were.

She kept telling us to calm down, that we were being silly. Eventually, Panstu bribed us with soda, movies and AC to shut up and stop texting her.

Frightened as we were, we would rather be scared with soda, than scared without. Skuttle and I decided we needed 'weapons'. Skuttle claimed a curtain rod that had fallen down a few days before, Tatum had matches and bug spray, Sketch had I don't remember, and I, a rainbow bra.

Before heading out the front door, we had a huddle, planning our route. We had to run about 100 yards, in the dark, and trying to avoid a huge fire ring and hay bales to get to Pantsu's house.

But before we could even think about that we had to find the courage to make it past the blind spot created by the trees that surrounded our home.

After some deep breaths and counting to 10, we bolted, the heavy homemade screen door slapping behind us. Tatum, Skuttle, Sketch, and I ran without stopping, 'weapons' in hand, wrapped in our favorite blankets to the small little house, far away from ours.

We were so happy to be with all three of our camp 'moms'(hey, we needed a lot of love), watching movies , drinking soda. Somewhere in there, we all fell asleep, in the strangest places. I woke up on a very dirty and cold tile floor, Tatum was lucky and got a couch, Skuttle was cuddled up with a life guard buoy,and sketch fell asleep on top of a desk. 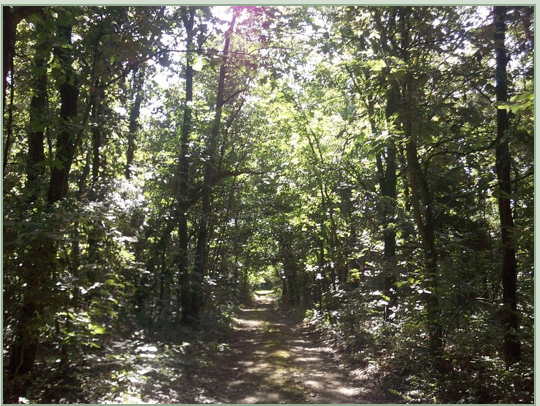 Later that summer, me and Tatum went joy ridding down that road. (Pictured above)

I had a blonde moment, and crashed our awesome golf cart. "Oh I wonder where that go-" Crash! I ran over a small tree that had fallen and hit another one. Grandmother Willow told our camp 'mom', and we officially lost all of our golf cart privileges.

Post and photo by marshmellow lover.
Posted by Nellie Mae at 4:53 PM